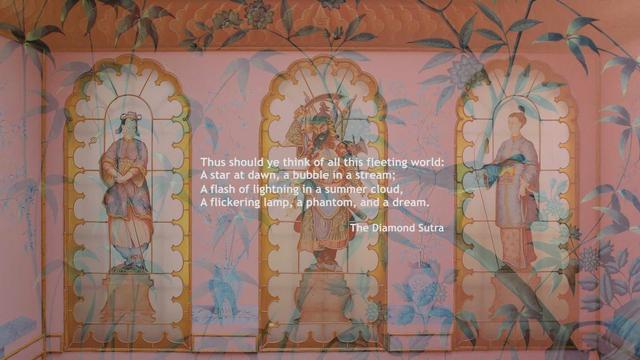 This is China of a particular sort, I do not know

‘This is China of a particular sort, I do not know’ is an artist film in response to chinoiserie, a European visual style of materiality imitating Chinese motifs popular in the long eighteenth century. It is set and entirely filmed at the Royal Pavilion Brighton, a pleasure palace built by George IV based on the idea of illusion, and hence its exterior being Indian Mughal and interior chinoiserie.

Across five dialogues and one monologue, the artist herself and relevant historical individuals - that are George IV the British King, Chien-lung the Chinese Emperor who received the Macartney Embassy, George Macartney who led the first British embassy to China, William Alexander the draughtsman from the Embassy, and Ang a Ching Dynasty royal family member and also the artist’s childhood neighbour in Taiwan – question, miss, argue and disagree with each other over the representation of Chineseness in chinoiserie at the Pavilion.

Such an interlocution is by nature imaginative as it travels across time and place. Yet all viewpoints are informed by the individuals’ lived experience and accordingly married with various perspectives from Chinese Studies, Sinophone Studies, Literary Studies, Postcolonial Theory and Tibetan Buddhism.

This film is one of the three case studies as part of the artist’s practice-based fine art PhD titled "Revisiting English Chinoiserie from the Perspective of Postcolonialism: How Can New Narratives be Embedded into Cultural Heritage Sites through Art Practice?".