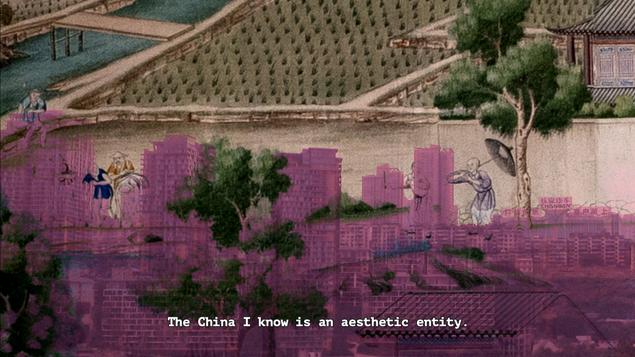 ‘Another beautiful dream’ is a postcolonial response to chinoiserie, questioning the representation of Chineseness in the visual style. Filmed in-situ, this work revisits the Chinese wallpaper from the 18th century at Harewood House, an English stately home. Integral to the culture of taste, exotic artefacts such as Chinese wallpaper then furnished houses of the landed gentry and enabled them to closely experiment with the foreign. And so, through exploring the other and thus establishing the self, modern British identity took shape in the heyday of maritime commerce.

Across the film, there are four monologues by ‘Chinese’ Chippendale - the designer sourcing and hanging the wallpaper, Chinese Emperor Chien-lung, the artist herself and Ang, the artist’s childhood neighbour in Taipei with Chinese Ching royal, Manchurian and Taiwanese background. The four characters critique the Chinese wallpaper in relation to self and other from their perspectives informed by their lived experience.

The artistic strategy of juxtaposing chinoiserie with the artist’s personal and familial photography serves to further explore self and other. As the wallpaper was made in China for export purpose, self-representation is at stake. The use of personal photos questions how one represents oneself in the present and how that negotiates self-representation from the past.

‘Another beautiful dream’ is sequel to ‘This is China of a particular sort, I do not know’ (2020). Both are part of the artist’s practice-based fine art PhD, revisiting English chinoiserie from a postcolonial and personal/Taiwanese/Chinese diasporic perspective through re-interpreting English chinoiserie collections at cultural heritage sites.